CodesWholesale Blog > Article > Why digital is greener than the boxed video games? 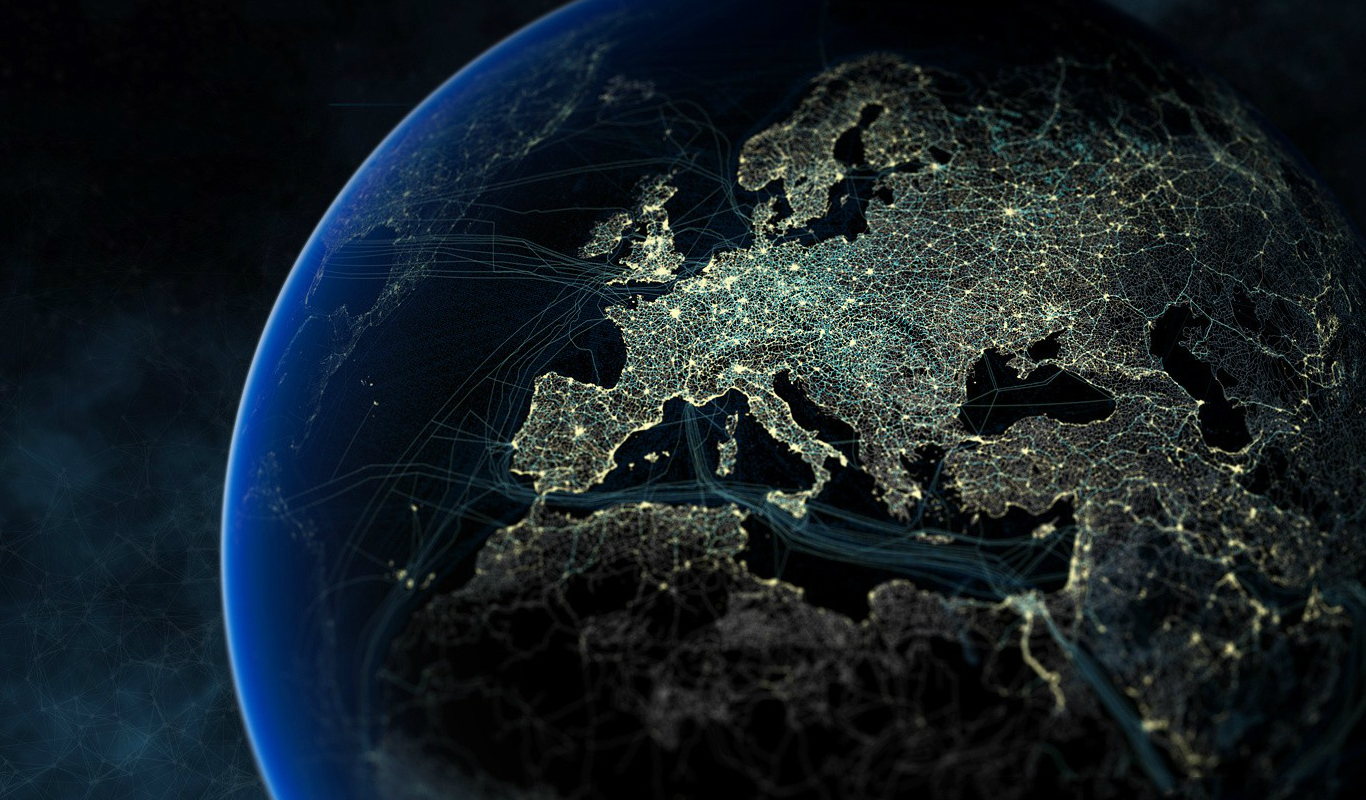 It seems obvious that the boxed games are less ecological than the digital versions. But have you ever wondered how many harmful chemicals are contained in the hardcopy, and how harmful they are for the environment? Some of the information will shock you!

First, dissect the box into pieces. What’s inside? Depending on the specific title and version of the game, the contents of the box may vary, but we can assume that most games contain the same elements:
– one or more CDs, DVDs or Blu-ray;
– a plastic box;
– paper cover and instructions (sometimes cardboard cover for the plastic box).
Each of these elements are made up of other materials, so each has a different effect on the environment. Therefore, let us examine them separately, in comparison to the digital version of the game.

Here is the detailed diagnosis of how digital vs hardcopy compare

Boxed version: Optical discs revolutionized the computer market, offering several times more storage space than previous FDD disks. Naturally we think of them as being something positive. However, their production generates huge amounts of pollution and consumes a large amount of energy. In addition, each disc contains several layers, each of which has a different job, and each is made of a different material:
– a base layer made of a polycarbonate plastic;
– a thin layer of aluminum coating over the polycarbonate plastic;
– a clear protective acrylic coating over the aluminum layer.
The optical disc also contained various kinds of dyes. How much time does it take for these types of chemicals to decompose in nature? It is estimated that it takes around 1 million years for each disc to decompose naturally. And, more importantly, their biodegradation release dangerous substances into t he environment which are harmful to humans. Remember that each month about 100,000 CDs are destined to be thrown away due to the fact that they become obsolete, unnecessary or unwanted.

It is also important to know what the production process is. The creation of a pound of plastic (the equivalent of 30 CDs) requires the use of 300 cubic feet of natural gas, 2 cups of oil and 24 gallons of water. To understand the scale of this process you should also know that recycling of these discs requires only 10% of the energy to produce them!

Boxes are suspected of causing cancer!

Boxed version: Most plastic packaging for CDs are made from polyvinyl chloride (PVC). This is a dangerous chemical, as it increases the risk of cancer in people who work on the production, but also for residents living near the factory. PVC is also a huge problem because it takes a long time to biodegrade in the natural environment in the natural environment, and when it does, it emits a series of toxic substances. Many different health organizations classify PVC as one of the worst materials, and some of them lobby for the discontinuation of its use, due to the fact that there are high dioxin emissions.

Digital version: The digital version of the game does not have a physical package. In a sense, we can recognize that a virtual file is a kind of packaging. However, creating a file does not involve the use of PVC or other dangerous chemicals which increase the risk of cancer. Disposing of a file on your computer is also easy – just move it to the trash in the operating system. In this way, we don’t create mountains of waste that are take a long time to biodegrade. It takes a few seconds, as opposed to hundreds of years.

Do you support the Amazon rainforest deforestation?

Boxed version: Production of paper, which is used to form covers and the user instructions, does not produce hazardous chemicals, as is the case of plastic boxes or optical discs. However, keep in mind that we need wood to produce paper, and this in turn requires the felling of trees. Unfortunately, it happens that it is conducted in a controversial manner, radically degrading the environment. Worse, this often happens in sensitive and delicate areas, such as the Amazonian rainforest. This not only affects rain forest, but also rich fauna living in the wider area. Because it must be remembered that the felling of trees in one place, can destabilize and damage the biological balance in a much wider area.

Digital version: Instead of paper covers or paper instructions, the digital version of the game can include a graphic file with titled picture, and the PDF with the manual for the game. The creation of a million copies of such files (one for each end customer) does not cut any trees in the forest. There is no need for any recycling action. This all arises virtually in the computer and it stays there as long as the user wants.

How high is the mountain of the garbage?

Boxed version: And that’s not all. We need to remember that the production of boxes is one thing, and their transportation from place to place is another thing. These versions of the games need to be transported from factories to distribution centers (warehouses), then to retailers and next to end customers. Even if customers are getting this product on their own, they need to get to the store, and usually they do it with a car or by a little greener public transport. The whole distribution process requires huge amounts of oil! Accenture and WSP Environment & Energy research in 2009 shows the transition from physical data storage based on the CD / DVD to digital reduced about 91% of the carbon footprint for Microsoft’s business customers!

This is only a small part of the problem. Mankind generates many of these mountains of garbage. After all, each year more than 5.5 million boxes of software and millions of music CDs, are thrown into the garbage. Every month, about 100 thousand pounds of CDs is earmarked for disposal. This huge mass of harmful debris is difficult to be recycled. Who can keep up with the pace?

Digital version: Digital versions of the game are the best answer to the problem of huge amounts of garbage. This virtual product does not require raw materials for the production of millions of copies. Because they come from “nowhere”, they disappear without having harmful trace to the environment. This is a sign of a new era in the history of human civilization. 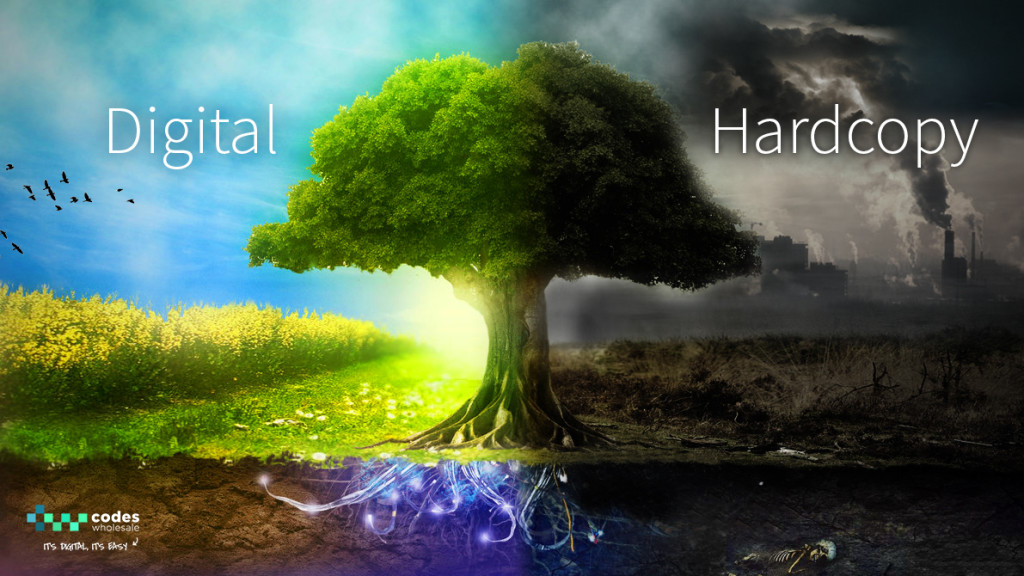 The digital choice is the green hope

Let’s summarize it all. Digital storage and distribution of data via the Internet eliminates all these problems above. During the generation of digital data, there are no emissions of carcinogenic dioxides or other harmful fumes, that would take a million years to decompose. Their transport (shipping via the Internet) does not burn oil, which does not increase air pollution. Documents or other data previously stored on paper does not cause deforestation. Everything can be stored and transmitted in electronic form.

More importantly, the transition from boxed to digital has other advantages that are impossible to achieve from trading hardcopy versions of games. After all, the storage of all data in the files does not require large storage areas, but only a computer disk which physically has a constant, small size, and can accommodate huge amounts of information. Transport of such data is simple and eco-friendly – just copy the data to a memory stick or send it via the Internet. It also takes less time than the traditional transportation! In this way, the end user receives their merchandise or information within a few seconds, even if the supplier is located on the opposite hemisphere of the globe.

Comparing the problems of boxed games to digital, we can talk not only about environmental trends, but also about economic considerations, or practical, in which are simplifying some processes (eg. Purchases) and saving time. Therefore, if given the choice between hardcopy and digital, customers prefer the transition to a digital products. For them, their time and convenience is more important (and of course environmental awareness in the activities of the brand). For them, more often, the product is only a game, a virtual file, which is for entertainment, not a physical object. Physical storage becomes a problem for them, because you have to store it somewhere and be careful not to damage the disc. If a disc is damaged it must be thrown away. In contrast, digital games are received quickly and cheaply regardless of where they are at. And this is without having to worry about shelf space, or any damage, because the game can be re-downloaded from the manufacturers server. This is because, according to the ESA report in 2014 in the US, the number of digital games sold was greater than their physical counterpart. And these changes every year are becoming clearer! The same trends with various dynamics are all over the world. Consumers are changing along with constant technological progress. Their needs are changing as well. And businessmen need to adapt to this.

Or land on top of the garbage, which they build themselves contributed.

Invest in gaming industry in Russia

5 most common questions about the new risk score feature answered!